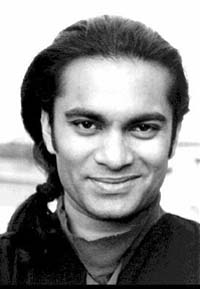 Raywat Deonandan has never believed in defining his expanse. He has aspired to be an astronaut. However, his aspirations have taken him farther than the realms of space and time. He is an avid author and writer, an active epidemiologist, a lecturer, a research scholar and essentially a man of science.

Often people of science see the beauty in things, but find it hard to phrase the words. For Raywat, however, the words have been a living, breathing presence since he was in his early teens.

Sweet Like Salt Water, his first collection of short stories, published by Toronto's TSAR publications appeared in print last year and has created ripples since then. The search for a connection is deep rooted in Sweet Like Salt Water and so is the quest for identity.

Raywat's stories and articles have appeared in magazines, newspapers and journals in Canada, United States, England, New Zealand and translated in Japan and China. Raywat was awarded two Hart House Literary Prizes at the University of Toronto and First Prize in the 1995 Canadian Author's Association National Student Literary Competition. He is currently completing a Ph.D. in Epidemiology and Biostatistics from The University of Western Ontario.

Born in Guyana, Raywat moved to Canada when he was just two years old. His parents formed the link, between Guyana and India. "The indentured slaves who were brought to Guyana by the British, never felt that they were part of the country. They wanted to go back. Their thought that 'one day you are going home', remained alive," says Raywat.

The quest for identity has been Raywat's own in many ways and writing Sweet Like Salt Water, a personal experience. He visited Guyana as a child and traveled to India a few years ago but in the effort to find the sameness, he realized the difference. "I am Canadian," he says, "You know when you are away, when you are looking too hard to find a connection, often you don't find one."

Sweet Like Salt Water encompasses intricately woven stories written over a period of time. The essential theme is that of immigration and identity. Only the setting changes colour from locales in Guyana to India and from corridors of Singapore to the streets of Canada. According to Raywat, "There is a universality between all immigrants, a universality between values that remain and permeate all cultures, those are family values."

Water forms a connecting link throughout the anthology. Raywat draws similarities between the Caribbean Sea, the Indian Ocean and Lake Ontario. The missing link - the search for a connection submerges itself in the collection and then resurfaces.

From the first - 'Children of The Melange' to the 'Motherland', the most interesting aspect of every story is the way it ends. At times the ending note is thrilling, on other occasions brilliant and often mesmeric.

Every little account, every weave in his fictional strand has a unique intonation. It almost transposes you to another land, a different world so varied yet so distinctly similar.

The celestial aura of 'Nataraj' charms from the moment, "Thanaj lay on a bed of hay, his eyes tightly shut...He felt the motion of the earth, its race through space while tethered to the sun." The awareness of life and its spirituality comes alive in very humble environs in the story with Thanaj educating his son Nataraj and the truth eventually dawning on Nataraj when his father dies.

"...Returned to the cycle," Nataraj had said as he watched his father's body burn in the cremation fire. True to his name, he had focussed his mind on the image of dancing Shiva, with the drum of creation in one hand and the torch of destruction in the other. Still, the anguish choked him, for never again would he lay with his father beneath the stars. Nataraj was now husband to his wife, protector to his mother, and father to his sisters. The ecstatic wisdom of Thanaj was lost to him forever."

Raywat's interest in history is apparent especially in his caricature of the British Raj and the contrast which comes across in 'King Rice' about a crazy cricket fan in Guyana. The account is comical and brings out the significance of language in Caribbean culture and the Creole. Interestingly enough rice becomes the symbol of independence and strength.

'The Reef' is pure science fiction and is one of Raywat's earliest short stories. It also appears in North of Infinity, an anthology of Canadian speculative fiction. 'On Germ Warfare And Bad Sex' is a very clever mix of the experiences of a physicist, a mystic, a conspiracy theorist and the US President. It is comparable to Roald Dahl's style, which surprises and thrills at the same instance.

Other stories in Sweet Like Saltwater include 'Far from Family', 'The Rhymer', El Dorado', 'The Ten Thousand and One Directions', 'Seasonal Youth,' 'Camel Lips', 'Son of Caine', 'Sanjay and Allison' and 'While I Drink My Moccacino.'

Raywat is currently writing a novel, Divine Elemental and a collection of South Asian tales titled, Folktales of Ancient India. He has accumulated indigenous folk tales and developed the original core narrative to preserve the pure story. He has an interactive online cultural criticism magazine titled, 'The Podium.'

This is coupled with innumerable freelance, consulting and scientific projects related to the pharmaceutical industry, biotechnology, space science, health and epidemiology.

Raywat's interests involve the martial arts. He has a black belt in Shotokan Karate and feels that martial arts is, "A stream leading to the same river which teaches you to tolerate pain and brings humility. It involves sacrificing the body to train the mind."

Raywat describes his most divine and profound moment at the age of 15 in a Mathematics class when an equation came alive with the power of chalk, "Seeking something divine while proving the unprovable." He hates calling himself an artist. "Innovation is about a new kernel, not an idea. Why do people define themselves by one thing only?" he queries. And so the ripples surge again. For more info. visit http://www.deonandan.com/